In this post we’re going to look at 5 free plugins that are suitable for mastering. In fact, these 5 plugins will make up a very usable mastering chain all by themselves. And they are free as well. Amazing! Let’s go!

First up is TDR Nova from Tokyo Dawn Labs. This is a really nice, flexible and great sounding plugin. It’s a normal EQ, a dynamic EQ and a compressor, all in one. There are four bands of EQ, all of which can be set to dynamic mode. In dynamic mode we can adjust the threshold, ratio, attack and release for each band, as well as to the wideband signal. There’s also high pass and low pass filters, as well as a lot of other features.

In mastering, TDR Nova can be used for a lots of things. At the core, it is a flexible and great sounding EQ, and with one or two instances, we can cater for most EQ needs. By switching bands to dynamic mode, we can use Nova to control the bass, take care of resonances or build-ups, act as a deesser to reduce sibilance, or even be set up as a multiband compressor. The wideband compressor sounds nice as well, although there are more flexible solutions available for that, which we’ll get to later.

This a very deep and versatile plugin. And the fact that this is completely free is just amazing. There is a paid version as well called TDR Nova GE with a very reasonable price.

Next up is also a plugin from Tokyo Dawn Labs, and this one is called TDR Kotelnikov. This is a really nice, clean, great sounding compressor. If there is such a thing as a digital sound, Kotelnikov has none of it. That’s not to say that it is without its own character, but it’s overall a very transparent compressor. There are threshold and ratio controls, as well as attack and release. This is a dual-release type of compressor, so we have two release knobs, one for peak and one for rms. This gives us the ability to use a short release for snappy transients, and a longer release for when the compressor digs in on the meat of the sound.

Just as with the TDR Nova, there is also a paid version of TDR Kotelnikov called TDR Kotelnikov GE. This plugin is extremely affordable, and it brings some additional features that are very useful. Highly recommended.

Plugin number three in this list of free plugins for mastering is from Klanghelm, and it’s called MJUC Jr. This is also a compressor, but while TDR Kotelnikov is transparent, MJUC Jr is anything but. This thing has thickness and character all over the place. It is not something you slap onto every master, far from, but sometimes you just need something to fatten up a thin mix.

The compression action can be a little over the top, so the best results often comes from having the gain reduction meter barely moving, just getting the fatness and additional harmonics from the plugin. This plugin also has a paid version with additional flexibility, called MJUC without the Jr.

Plugin number 4 is a peak limiter called LoudMax and it’s made by Thomas Mundt. This is a really simple but great sounding peak limiter, with a minimum of controls. There’s a threshold, which also boosts the input level, and an output gain to set the ceiling for the peaks. A normal output value these days would be somewhere between -1 to -0.2 dBFS. The ISP button stops intersample peaks from exceeding the threshold as well, which is usually what we want, although it might soften the sound a bit. The link button will link the threshold and output controls, making it easier to audition different amounts of limiting while keeping a consistent listening level.

This limiter might not give us everything we need if we want to make really loud masters. But if we stay at sane levels and don’t attempt to win the loudness war, it is a very nice and transparent limiter that is easy to use.

The last plugin is a metering plugin from Youlean, called Youlean Loudness Meter 2. With this we can measure the loudness according to the EBU R128 standard. This is the standard way of measuring loudness today, and it’s a good thing to know about and to be able to do.

The plugin runs in a free mode, but also has additional features that can be unlocked by buying a pro license. For mastering though, you’ll probably get all the functionality you need from the free version.

These 5 free plugins form a very competent mastering chain, capable of handling lots of situations. If you are just starting out, this is a very good place to begin your quest. The further you get into the rabbit hole of mastering, the more plugins or hardware you will find that works better for certain tasks, and you will slowly build your own set of tools. But these plugins will certainly get you started, and you might be surprised how long some of these will stick around in your chain!

If you want some more tips on how to actually use plugins while mastering, you should grab your copy of our free guide “5 Mastering Strategies Using Free Plugins”! In this pdf you’ll get some solid guidelines about settings and methods, as well as some additional free plugin recommendadions. 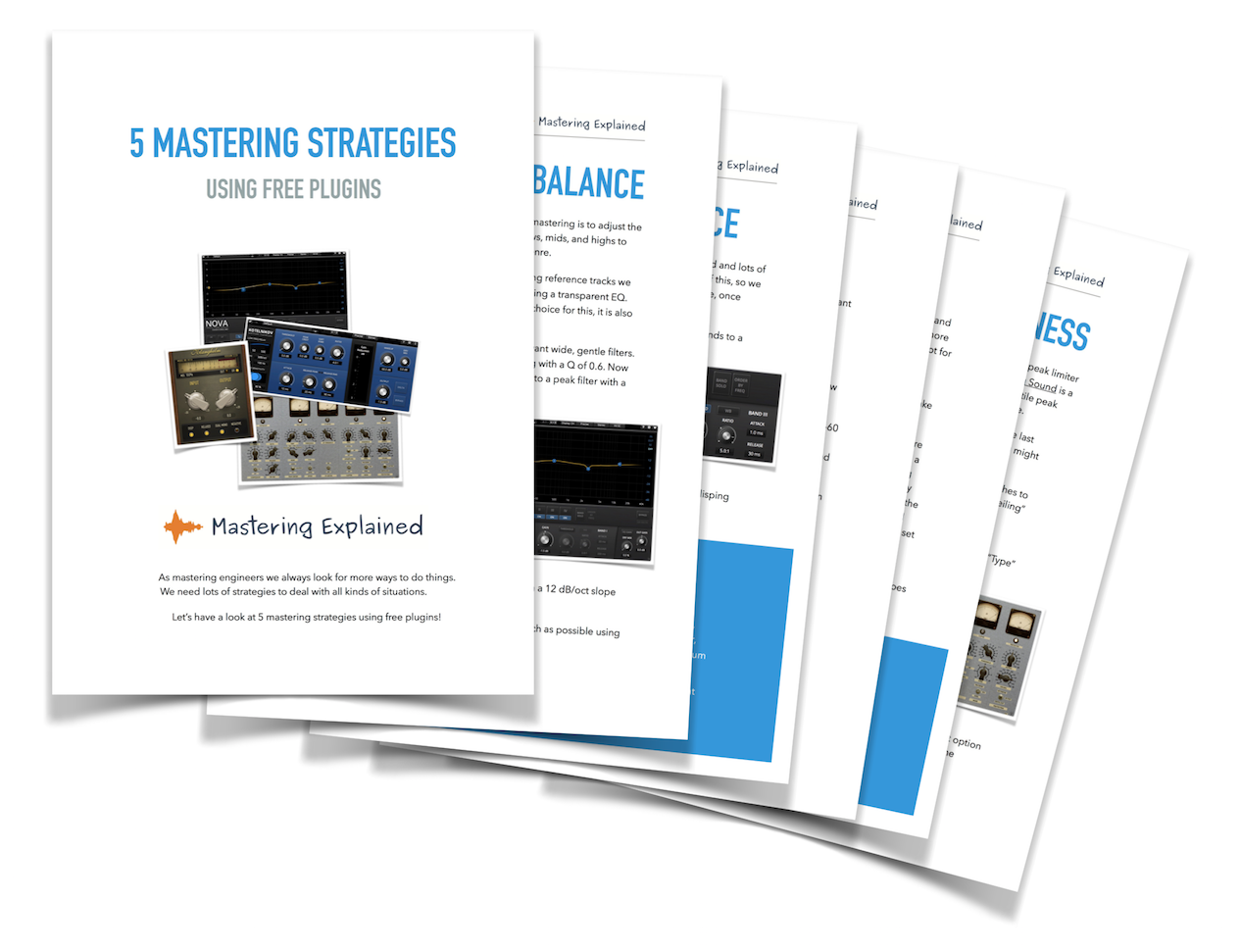 Sign up to our email list below to receive the pdf. You can of course unsubscribe at any time.